The Phillips Curve is a graphical representation used in macroeconomía to reflect the relationship between inflation and unemployment in a country. It is one of the most important links in calculating the economic and monetary prospects of a state's economy. Below, you will find all the information that you are interested in knowing about the concept of the Phillips Course, its fundamentals and how to interpret it.

What is the Phillips Curve for?

William Phillips (1914-1975) was an important economist influenced by the theories of JM Keynes. It was in 1958 when he reflected in a graph the inflation rate and the unemployment rate of the last hundred years (1861-1957) and observed a negative curve that reflected the following hypothesis: higher unemployment, lower inflation, and vice versa. In other words, "there is a negative relationship between inflation and unemployment", as we will see below.

This graph is based on the fact that the amount of money in circulation (also known as "money supply") has significant and real effects on the economy in the short term. In this way, an increase in this money supply makes citizens spend more as their nominal wages increase and can lead to a more favorable investment framework. All of this would motivate a economic growth and the consequent creation of new jobs.

The Phillips Curve enjoyed good acceptance among twentieth-century economists and was considered as the basis for deciding and promoting certain economic policies.

How to interpret the Phillips Curve 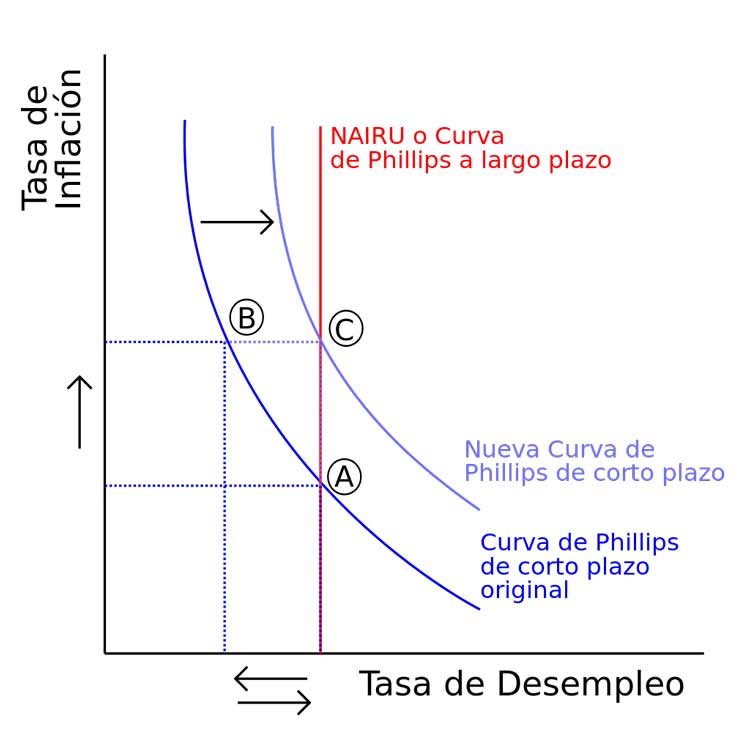 To understand the Phillips Curve it is essential to bear in mind that this graph can be interpreted both in the short and long term. On the one hand, in the short term (blue curve), if the demand for goods and services increases, companies must increase their production and, with this, they will need to hire more employees and unemployment decreases. Thus, the demand of consumers is greater than the supply of companies, and individuals will agree to pay more for goods and services. In this way, prices rise (plus inflation), something that we see reflected in the passage from point A to point B on the graph.

However, on the other hand, supply and demand tend to adjust in the long term, which is reflected in the curve at point C, until unemployment reaches the "natural rate of unemployment" or NAIRU (Non Accelerating Inflation Rate of Unemployment), that is, the rate that does not accelerate inflation, as can be seen in the red line. However, in the long run, the unemployment rate is not affected by the inflation rate: prices will rise and fall, without having an impact on unemployment rates.